Workshops was held in Docum Colony, A sector, on 11th June; in A sector community hall on 12th June and in D sector Govt. ME School of Naharlagun on 13th June. In this respect ENVIRON has targeted woman’s of the locality in Naharlagun and Itanagar to empowering them for vigorous production of paper bags to minimize plastic pollution.

The workshop was inaugurated by Mr. Talo Potom, additional district magistrate, Itanagar. In the inauguration speech Mr. Potom has given emphasized on the people participation and cooperation for proper solid waste management and to build a clean Itanagar.

ENVIRON has given the importance for the maximum availability of paper bags as a substitute of plastic carry bags. In his speech ENVIRON president explained about the worst effect of plastic which needs more than 5000 thousand years to mix with the soil. Principle of Three “R” i.e. Reduce (through using of plastic alternatives like paper bags, paper cups, earthen cups etc.), Reuse (reusing of same plastic instead of throwing), Recycle (recycling of waste plastic to avoid dumping in the soil) is the best way to prevent the plastic pollution. 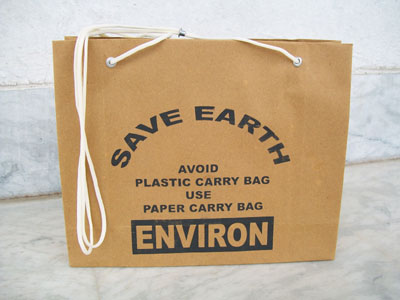