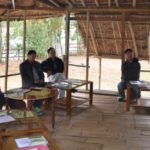 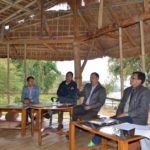 (KICES), a local NGO working on culture and ecology of the region and Mr. Rajib A. Miku, General Secretary, Idu Mishmi Cultural & Literary Society (IMCLS) have participated in the discussion emphasizing on heritage conservation considering gibbon as a flagship species. Also, several suggestions were made during the meet for proper implementation of the school level programme and community conservation initiatives .

JB Polu raising a point during the meet

Dr. Kuladip Sarma, Principal Investigator of the Project gave a comprehensive overview of the CHGAAP project and work done so far in the project. Mr. K. Mazumdar, Head (Honorary), Division of Wildlife & Biodiversity conservation also gave a background of the programme, appreciates the support of USFWS for the programme and hope that they will prolong their support in the similar efforts in next phase also.

It is noted that the project was officially launched in October 2015 by the Principal Chief Conservator of Forest & Principal Secretary (E & F) in Itanagar with the support of Forestry Department, North Eastern Regional Institute of Science & Technology, Dept. of Zoology, Rajib Gandhi University and G.B. Pant Institute of Himalayan Environment & Development, NE Unit, Itanagar.