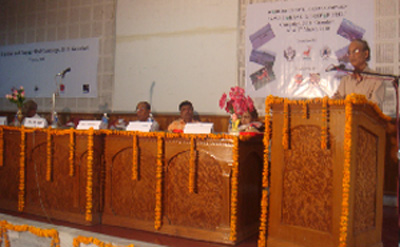 Northeast Centre for Environmental Education and Research (NECEER), Imphal had organised Worldwide Save Loktak Lake Campaign at 20 cities in 3 continents on 7th March 2010.
ENVIRON in collaboration with NECEER had carried out the Worldwide Save Loktak Lake Campaignin the state of Assam. This unique Campaign in Assam was organised at Gauhati University, Guwahati and Women’s College, Silchar. The campaign was an attempt to create awareness about the threats and need for conserving this natural heritage of North-east India. ENVIRON in association with Abhiyatri and Panchatava, G.U. also organised a campaign to save DeeporBeel, another Ramsar site of Northeast India. The event was chaired by former PCCF of Assam, M. C. Malakar.Vice Chancellor, Gauhati University also graced the campaign as chief guest and inaugurating the ‘Save Loktak and Deeporbeel Campaign’ in Guwahati.
About the Campaign:
Loktak Lake is the largest fresh water lake in Northeast India. It has an area of 300sq. km. and has been recognized as Ramsar site in 1990. KeibulLamjao, the only floating national park in the world is situated at the south west part of the lake. Deeporbeel is another lake from Assam which has also been designated as Ramsar site in November 2002 (infact it is the lone Ramsar site from Assam) while we will also focus conservation issue of Son beel and Chatla wetland two important wetland of Barak valley Southern Assam. These lakes are home to many endangered and vulnerable species of avifauna &amp; mammals, particularly the Loktaklake is only home to critically endangered Manipur brow antlered deer ‘Sangai’ (Cervuseldieldi) and many bird and plant species. Deeporbeel has been selected as Important bird area (IBA) by Birdlife International.
These lakes have been a main source of income and sustenance for inhabitants of the area. For the last few decades these lakes has been facing all round destructions due to both natural and anthropogenic activities. Rapid expansion of Phumdis, siltation, pollution, agriculture and adverse effect from Loktak Hydropower Project are some of the main problems which had led to an alarming destruction of the lake.
North EastCentre for Environmental Education & Research (NECEER), Imphal in partnership with more than 20 organisations across the globe, launched a worldwide campaign to Save Loktak in 25 Cities (23 Indian Cities; New York and Washington, U.S.A and London, U.K.) and 5 Towns across the globe.